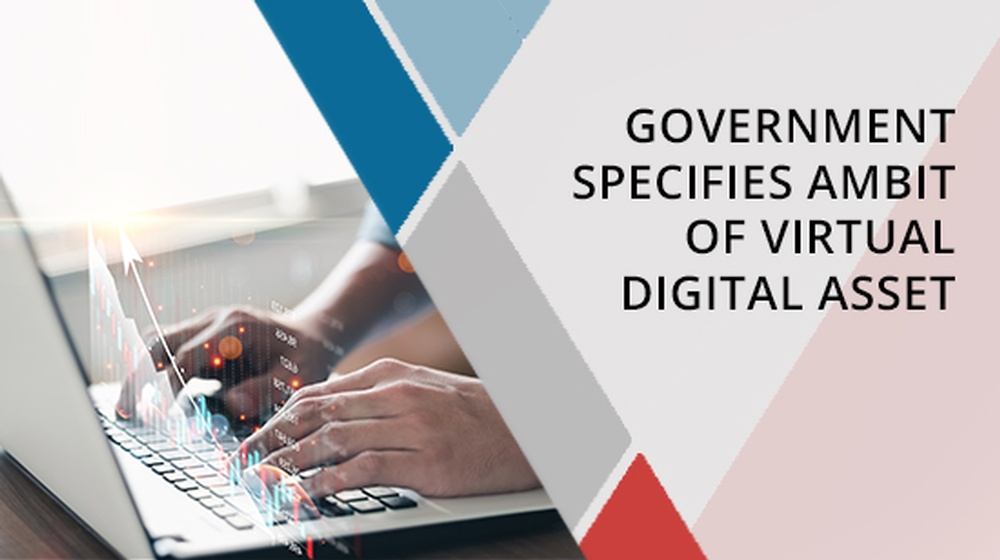 The Central Board of Direct Taxes recently came up with two notifications that further clarified the definition of Virtual Digital Assets (“VDA”) as given in Section 2(47A) of the Income Tax Act, 1961 (the “Act”). Notification 1 notified that gift cards, vouchers, mileage points, reward points, loyalty cards, subscriptions to websites or platforms or applications are excluded from the definition of VDA. Notification 2, on the other hand, has specified that a Non-Fungible Token (“NFT”) whose transfer results in the transfer of ownership of an underlying tangible asset which is legally enforceable, will not be covered under VDA.

Beside the definition of Zero-Coupon Bond [Section 2(48)] and the newly inserted definition of VDA, no other definition under the Act gives power to the Government to alter the definition by way of a mere notification. Nevertheless, the Supreme Court has sustained the actions of delegated legislation that provide for exemptions on certain goods, persons, or class of persons under the taxation policy framework. In S. B. Dayal vs State of UP, while dealing with the same question, the Supreme Court has observed that “the very complexity of the modern society and the demand that it makes on its Government have made it necessary to entrust the executive with more and more power.”

The definition under Section 2(47A) mentions that any information or code or number providing a digital representation of value is to be termed as VDA. Gift cards, rewards on credit card points, subscriptions to websites, etc all are merely promotional schemes. The discussion around them gained some thrust only because of the wider scope of the definition of VDA. Thankfully, the Government clarified that gift cards, vouchers, mileage points, reward points, loyalty cards, and subscriptions to websites or platforms or applications are not be taxed as VDA.

Before we get into the implication of Notification 2, let us understand the concept and evolution of NFTs. An NFT is a virtual asset which indicates a financial security stored in the form of digital data having a unique identification code that cannot be replicated. These codes are hosted on blockchains having the same underlying software as various cryptocurrencies. But they are not interchangeable like cryptocurrencies. NFT could be an image, a piece of music, a video, a 3D object, and even a virtual real estate. You cannot trade one NFT for the other as they are not the same, in terms of their value and appearance. They are valued based on their different exclusivity, design, rarity, and art-based attributes.

How Does NFT Work?

NFTs are stored on blockchains, and they represent both tangible and non-tangible items in their digitized format. They offer a platform for artists to showcase their creations and earn consideration upon their sell. This NFT market and its marketplace where these transactions happen using cryptocurrencies, such as OpenSea, is booming and art pieces are getting sold for millions of dollars. Very recently, Amitabh Bacchan sold the recitation of his father’s poem ‘Madhushala’ in the form of an NFT, Manish Malhotra - a famous fashion designer launched his exclusive sketches and runway GIFs as NFT. All of this is enabled via smart contracts which stores the data during transactions, makes it accessible and unchangeable ensuring transparency.

Music pieces, images, videos, 3D objects can be represented in the form of NFTs but the world of NFTs is not limited to these elements only. There exist sports memorabilia such as autographs, pictures, trophies, awards and fashion items owned by celebrities which are tangible asset but are minted in the form of NFTs which then can be traded in physical forms too.

Few NFTs not to be Taxed as VDA

Tangible assets can be paired with blockchains to produce an NFT and the NFT holder is the owner of the asset. NFT makes it easy to handle, transfer and more importantly establish ownership over the tangible asset. As such NFT which represents art, videos or for that matter a parcel of land is now clarified to be out of the definition of VDA. The primary reason for such distinction is the fact that as it is there is a separate levy of tax on transfer of such tangible assets and therefore, taxing the NFT transaction as VDA would result in taxing one transaction twice. This is certainly a much-needed clarification in terms of application of tax in an ever-evolving world of crypto assets.

While the tax provisions and the time-to-time clarifications are doing a fine job of bringing in clarity from an income tax perspective, given the complexity of crypto assets, there is an immediate need for a proper all-encompassing legislation for crypto assets with a dedicated watchdog for the industry.